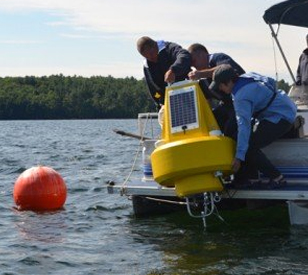 Maine’s Lake Auburn has experienced an uptick in recent years of algal blooms that have contributed to anoxic events and fish kills. And while the effects of those blooms have been visible, what isn’t so clear is their cause. To find out what sort of conditions are spurring blooms in the water body, scientists at Bates College partnered with the Auburn Water District to launch a monitoring system.

The system, deployed in summer 2013, is proving important to researchers at Bates College because it’s cluing them in on the inner functions of Lake Auburn, especially those relating to the lake’s oxygen dynamics. For the Auburn Water District, data collected by the system are helping to keep the drinking water source clean and viable for the people who live and work around it.

The new monitoring platform was spurred by other research projects in the region that used buoys with great success. As scientists from Bates College collaborated on those projects, they saw firsthand the value that high-resolution water quality data can provide. 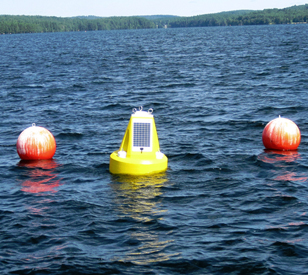 Temperature sensors suspended throughout the water column were a must for the project, as researchers wanted to be able to see the lake’s mixing in real time. For this they chose a NexSens T-Node Fast Response Thermistor String that allowed them to take temperature measurements in Lake Auburn at 10 different depths. The string was deployed below the buoy and affixed to a steel line for solid performance in wave action.

Along this same line, three PONSEL DIGISENS Optical Dissolved Oxygen Sensors were installed to collect information on Lake Auburn’s oxygen dynamics as they relate to temperature change. And because the PONSEL DO sensors also feature integral thermistors, they allowed researchers to monitor temperature changes at three additional depths.

Both the T-Node FR thermistors and PONSEL DIGISENS sensors were plugged directly into the watertight bottom ports of a NexSens SDL500R data logger equipped with radio telemetry. This logger is housed securely in the instrument well of a NexSens CB-400 Data Buoy that powers the system with solar panels. The logger inside communicates with a NexSens 4100 Radio Base Station onshore that relays data from sensors to a NexSens Web Datacenter that is viewable online and on lab computers at Bates College.

The whole system is complemented by monitoring equipment that the Auburn Water District already owns and operates, including a weather station that collects temperature, wind and precipitation data that are shared with scientists at Bates College. A photosynthetically active radiation (PAR) sensor was also added to this weather station so that those at the District and Bates can study what effects sunlight has on algae growth in Lake Auburn.