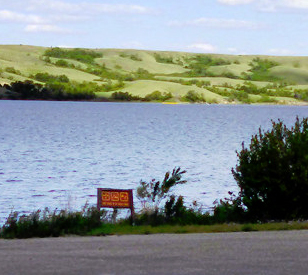 Saskatchewan’s Buffalo Pound Lake is a shallow drinking water reservoir with a history of algal blooms. And its shallow depths, as well as intensive agriculture surrounding it, haven’t made things easy for scientists working to predict water quality changes there.

Wind, say scientists from the University of Saskatchewan, is key to the lake’s algae issue. Because the glacial lake sits in snake-like fashion in a small valley, its water doesn’t move much. This lets algae rise to the surface and easily propagate.

To get a better look at water quality influences of the wind, as well as others from farming activity nearby, researchers at the University of Saskatchewan launched a NexSens data buoy equipped with sensors for measuring weather conditions, sunlight levels, and temperature changes. 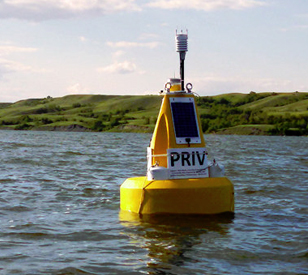 A NexSens CB-800 (now the CB-450) data buoy was chosen for the application because of its suitability to Buffalo Pound Lake’s demanding waters. With an 800-pound buoyancy, the buoy provided a stable platform equipped with three 10-watt solar panels, sensor holes for attaching deployment pipes and a topside plate that could support beacons, weather stations and other monitoring devices.

Scientists at the university attached LI-COR LI-190 and LI-COR LI-192 sensors to the secure buoy platform to measure solar radiation above and below the water. A NexSens T-Node FR (fast-response) thermistor string was deployed beneath the buoy to track the lake’s temperature changes and monitor turnover. On the topside, a Vaisala WXT520 multi-parameter weather station measured wind speed and direction across Buffalo Pound.

All sensors were powered by solar panels, and a rechargeable battery pack served as a backup energy supply. Data were logged to a NexSens submersible data logger housed within the buoy itself. Equipped with cellular telemetry, the data logger beamed findings back to researchers on land who viewed it on their desktops using iChart software.

The findings have proven useful for figuring out the wind’s impacts on Buffalo Pound Lake’s algal blooms. Researchers were quick to note that conditions on the water are more turbulent when wind flows parallel to the lake and calmer when wind flows perpendicular to it. For other lakes nearby, the wind data may also help dissect algae problems. And scientists are keen to learn what lake chemistry changes come about due to water level fluctuations in the drinking water reservoir. 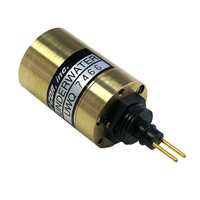