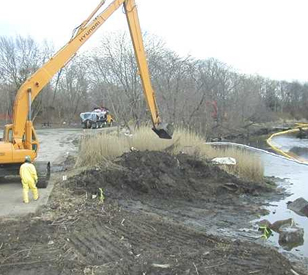 New Bedford Harbor is fed by the Acushnet River from the north and drains into the Atlantic Ocean to the south. Its steady flow is one of the reasons so many industrial plants set up shop along the harbor in the early 1900s.

Back in those days, no one knew about polychlorinated biphenyls, or PCBs, and their effects on the environment. So, along with utilizing the harbor’s water to operate their machinery, plants also used it as a destination for PCB-laden discharges that still affect the area today.

PCB levels were so high in the harbor that the U.S. Environmental Protection Agency listed it as a Superfund Site. The levels they based their decision on showed that New Bedford Harbor had PCB concentrations much higher than other similar superfund sites in the U.S. To put its distress into perspective, the harbor had levels of PCBs approaching 10,000 parts per million in some places; the next Superfund Site close to those levels is in Field Brooks, Ohio, where PCB levels were found at only 600 parts per million.

To bring New Bedford Harbor back to fuller health, the EPA and U.S. Army Corps of Engineers’ New England District have been dredging the waterway since 2004. Each year, proposals are sought from firms looking to assist in the cleanup work. Battelle, an applied science and technology development company based in Columbus, Ohio, was contracted to perform background water quality monitoring of the dredging in 2015. The goal, like with other such monitoring work, is to make sure that aquatic life in the harbor isn’t negatively impacted by turbidity levels spurred higher through dredging. 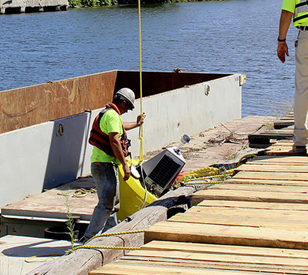 Four NexSens CB-450 Data Buoys were selected for the project. Since New Bedford Harbor is a bay opening up to the Atlantic Ocean, CB-450s were more ideal for standing up to the wave actions that can be seen there. In addition, the buoys offer passthrough holes for securely deploying sophisticated sensors used in the work, as well as solar panels that make sure all equipment onboard receives a reliable supply of power.

With four buoys, project managers can monitor turbidity at multiple points around the dredge through readings reported by a YSI EXO2 Multi-Parameter Water Quality Sonde on each platform. Every sonde is deployed in a protected passthrough hole and equipped with sensors for measuring temperature, conductivity and dissolved oxygen. Each EXO2 also uses two optical turbidity sensors to provide redundant measurements. Doing this ensures measured turbidity levels are accurate, as well as minimizing the risk of dredge stoppage if one sensor malfunctions.

Data from the sondes are recorded by NexSens X2-CB Buoy Data Loggers housed within each platform’s instrument well. These loggers are equipped with cellular telemetry and transmit data on the harbor’s water quality to project managers using NexSens software. From that point, data are ported to a custom data center set up by Battelle through which they can be viewed remotely from anywhere with an internet connection.

The buoy platforms are deployed wherever dredging is underway, so managers with Battelle change their locations as needed to provide adequate background monitoring. In addition, technicians with Battelle use a fifth YSI EXO2, along with an EXO Multi-Parameter Handheld Display, to spot-check the turbidity readings reported around New Bedford Harbor.