A small campus pond on the New Paltz branch of the State University of New York has a big effect on water quality downstream. Called “The Gunk” by students and staff because of its position near the Shawangunk Mountains, the pond flows directly through the Wallkill River, a tributary of the mighty Hudson River that crosses all of eastern New York.

Though The Gunk isn’t a very big pond, researchers and students at SUNY New Paltz recognize its role in eastern New York’s water cycle and its value for the campus, both as an aesthetic component and research tool. And so it has become a focal point for water quality science and monitoring efforts going on at the school.

Those efforts got a big boost in the summer of 2013, when researchers and students at SUNY New Paltz partnered with the New York Department of Environmental Conservation, the New York State Water Resources Institute at Cornell University and the Hudson River Estuary Fund to deploy a small data buoy to monitor the water body’s health. The NexSens buoy supports high-powered sensors that collect data important for advancing research, education and understanding related to The Gunk’s internal dynamics.

Getting to know The Gunk 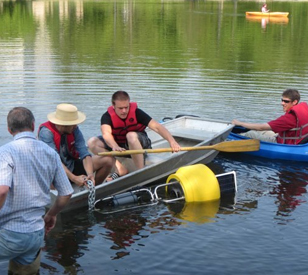 The heft of the system is provided by a NexSens MB-100S (legacy model) Data Buoy that is equipped with solar panels for powering sensors onboard. Those panels also provide energy to a NexSens SDL (Submersible Data Logger) that transmits data from the sensors to research managers at the school via cellular telemetry.

Deployed beneath the buoy is a YSI EXO2 Multi-Parameter Water Quality Sonde to take high-resolution measurements of pH, temperature, conductivity, optical dissolved oxygen and turbidity. Key to lengthening the useful life and reliability of the YSI EXO2 is its central wiper. This wiper provides superior bio-fouling protection that keeps sensors clear of aquatic lifeforms trying to find a place to settle. By simply wiping each sensor at a pre-determined time series, researchers ensure that sensors stay clear of critters like mussels, algae or everyday pond scum.

With the real-time capability that cellular telemetry provides, students at the school also developed a continually updating website so that the campus community can follow along as the buoy collects information about the campus pond. It features data in graphical form so that visitors can correlate water quality changes on their own, as well as maps and visual cues to make the entire project approachable and understandable to non-scientific observers.