The X2 contains two sets of (4) LEDs, which give insight into the operation of the data logger and Wi-Fi module, respectively. Two additional green LEDs beneath each magnet port give feedback when the magnet input is triggered. Note that all LED operation is suspended in sleep mode. A magnet can be used to wake the unit up and display its current status.

The main data logger status LEDs are found in the top transparent opening in the X2 faceplate and provide an indication of the power status, connectivity, system function, and more.

1WQData LIVE integration is automatically done after sensor detection is complete
2System errors can result from internal sensors detecting high current, humidity, or pressure. These errors can be indicative of a leak or other major problem with the system that requires attention. 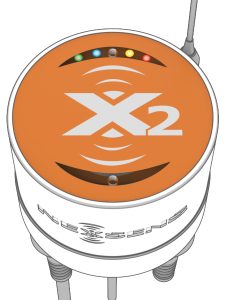 The Wi-Fi status LEDs are primarily used to determine whether the device is readily configured as an access point (Blue LED), or is connected to a configured network (Yellow LED). For more information on the operating modes please see X2 Wi-Fi Modes.

The Wi-Fi LEDs function as follows:

1If a Wi-Fi network has been setup on the device and is available, the X2 will automatically connect to the configured network after 30 seconds without a direct connection being established. 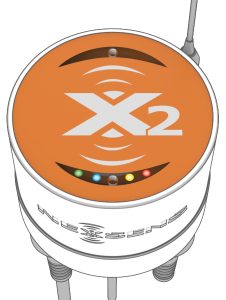