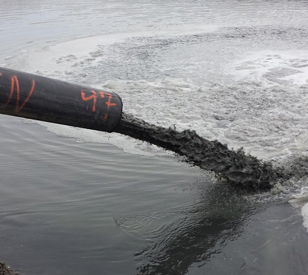 The Avalon Back Bay Maintenance Dredging Project, aimed to clear out portions of New Jersey’s Princeton Harbor and other surrounding harbors to maintain proper depths for shipping and recreation. The dredging project seeks to remove 120,000 cubic yards of material, a great deal of which has already been placed on Graven’s Island.

The Borough of Avalon crew obtained some of the necessary permits to begin dredging. Though expectations were that work would begin in September of that year, dredging didn’t start till sometime in late November. But still, crews with Tetra Tech, a global environmental consulting firm, were ready to go when the borough enlisted them to track total suspended solids (TSS) in discharge from a confined disposal facility on the island.

There were a few issues that experts from Tetra Tech had to contend with, however. One was time, as the middle of winter was fast approaching. The other was the remoteness of the site, which made it nearly impossible to visit or monitor total suspended solids from the discharge in a manual way.

The timing issue worked itself out, as necessary approvals came in when needed. As for the remoteness of Graven’s Island, not to mention its inaccessibility during high tide, the team from Tetra Tech obtained gear so that they could automate monitoring instead of relying on manual data collection.

To monitor TSS in the discharge in real time, project engineers sourced equipment from NexSens Technology, including a cellular data logger, multi-parameter water quality sonde with central wiper and web datacenter services. The crews were able to rent the gear through Fondriest Environmental’s rental program, which lowered costs substantially and ensured they got everything before dredging began. 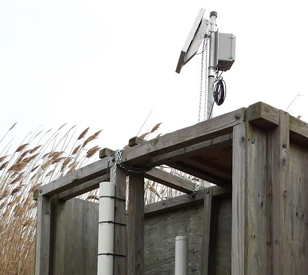 Tetra Tech engineers used a wooden platform set up at the confined disposal facility outflow. Near the top of this, they deployed a solar-powered NexSens Cellular Telemetry System, mounted on an aluminum pole.

A deployment pipe was mounted near the bottom of the platform at the necessary depth for tracking TSS in the discharge. Inside sat a YSI EXO2 Multi-Parameter Water Quality Sonde configured to monitor temperature, conductivity, turbidity and depth. The sonde featured a central wiper that spun periodically to remove gunk and biofouling from the sensors. Total dissolved solids were measured by the sonde and then compared to a calibration curve to obtain equivalent TSS readings.

Data from the sonde were recorded by the logger every hour and sent to a NexSens WQData web datacenter. Project managers, borough officials and even the captain of the dredging vessel were able to view discharge conditions in real time. Tetra Tech engineers also configured an alarm that would alert them, via mobile phone or other device, if total suspended solids levels exceeded limits while they were away from the site.