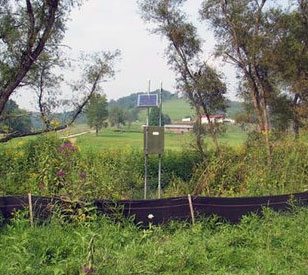 Coal mining can have a number of impacts on the surrounding environment and is therefore one of the most extensively regulated industries in the United States. In 1977, the federal government enacted the Surface Mining Control Reclamation Act in response to the negative land effects of coal mining.

Coal producers must go through a complicated process for obtaining local, state, and federal mining permits. SMCRA requires reclamation plans for future coal mining sites; these plans must be approved and permitted by federal or state authorities before mining begins. As of 2003, more than 2 million acres of previously mined lands have been reclaimed in the U.S.

Permit applications must describe what the pre-mining environmental conditions and land use are, what the proposed mining and reclamation will be, how the mine will meet the SMCRA performance standards, and how the land will be used after reclamation is complete.

A Pennsylvania engineering and environmental consulting firm contacted NexSens Technology for assistance designing and implementing a real-time stream gauging network at six stream site locations in western Pennsylvania. The systems will help describe the pre-mining conditions at nearby streams flowing through the proposed mining site(s). 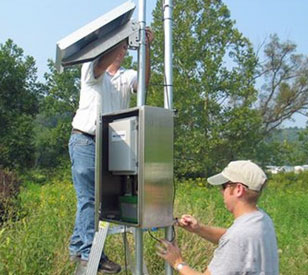 Due to the nature and extended timeframe of this monitoring project, both high accuracy and long-term sensor stability were important. Engineers at the consulting firm evaluated comparable instruments and systems, ultimately deciding on NexSens iSIC cellular data logging systems with OTT Compact Bubbler Sensors.

The NexSens iSIC Cellular Data Logger is designed for configuration with all major cellular providers. By activating and configuring the cellular accounts prior to installation, each stream gauging system was completely installed and set up for transmitting real-time water flow data in approximately two hours.

Project members wanted a rugged, all-in-one weatherproof enclosure to house the expensive electrical components at the remote sites. In addition, vandalism was a potential issue at select locations due to their remoteness. To address these concerns, both the data logger and bubbler were installed within a locking 24″ x 16″ x 8″ stainless steel enclosure.

As an alternative to mounting expensive sensing electronics in the stream, the OTT CBS bubbler system uses inexpensive bubble tubing and a bubble pot chamber for measuring changes in water level.

At user-defined intervals throughout the day, each of the six cellular data loggers collect water level data from the CBS bubblers, sending it to the project manager’s computer in real time.