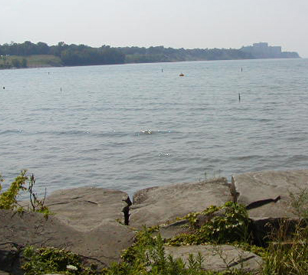 Following survey responses indicating that 10 percent of beachgoers felt sick after swimming in the Great Lakes region, scientists with the U.S. Geological Survey decided to increase monitoring efforts for fecal bacteria, or E. Coli. Instead of continuing to rely on the slow, sometimes delayed, laboratory analysis of discrete water samples, they opted for a real-time solution.

In fall 2010, researchers with the agency launched data buoys equipped with wave monitoring sensors to help aid the accuracy of E. Coli predictions. The goal was to make data on fecal bacteria in the water available more quickly so that beach closures and advisories could be issued at times more consistent with current bacteria levels.

Recreation and tourism are incredibly valuable to the economies of the Great Lakes states and key to maintaining that economic value is keeping beaches safe. The data buoys helped to protect those interests by making real-time E. Coli forecasts possible, as well as setting an example for other similar beach monitoring projects in the future. 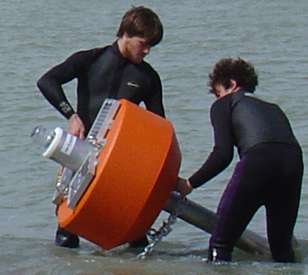 Scientists chose NexSens MB-300 (now the CB-450) Data Buoys as platforms to support their monitoring equipment, some of which was provided by the U.S. Geological Survey. The buoys were ideal for the multiple nearshore deployment areas because of the enhanced buoyancy and stability they offer in areas with choppy, unpredictable wake. They also support solar panels needed to keep data loggers running reliably.

As the U.S. Geological Survey didn’t have equipment to log data at all the sites, scientists chose to outfit some of the buoys with NexSens SDL Submersible Data Loggers. These, like other data loggers used, were equipped with cellular telemetry to transmit data on conditions near the shore in real time.

A key to predicting E. Coli concentrations is measuring waves, and researchers accomplished that with the help of NexSens AccuStage Absolute Water Level Sensors. By programming a rapid sampling rate, level measurements were collected multiple times per second, allowing scientists to calculate wave action that could be plugged into models for E. Coli forecasts.

Data on wave frequency and height were combined with others collected by nearby USGS stations relating to turbidity, photosynthetically active radiation and precipitation. Together they helped to create more accurate models of water quality near beaches useful in safeguarding public health and tourism.