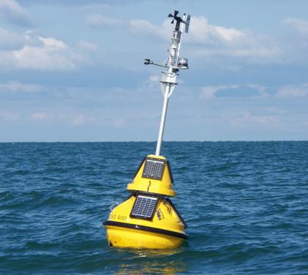 Lake Erie’s western basin has received a lot of attention in recent years, as it has hosted large and toxic algal blooms that seem to come every summer. But there are still plenty of valuable environmental data to be gleaned from studying in the lake’s deeper and less algae-prone eastern basin.

Researchers at Buffalo State University know the value of monitoring in this basin firsthand, as they have maintained a data buoy in eastern Lake Erie since 2011. It was launched with support from the Great Lakes Observing System near Dunkirk, New York.

The buoy provides meteorological and water quality information specific to its offshore area. When considered as part of the Great Lakes Observing System, its data can also be used on a broader scale in modeling lake currents, nutrient dynamics and even climatic changes.

Buffalo State researchers selected an S2 Yachts TIDAS 900 platform for the deployment. It is similar to NexSens Technology’s CB-650 Data Buoy in terms of footprint, but weighs around 400 pounds more. All the size gave it the heft to stand up to wave actions in eastern Lake Erie, as well as the space needed to support sensors and measuring instruments deployed onboard.

Buoys in the basin 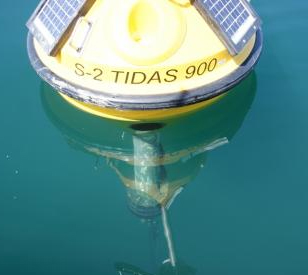 On the topside of the buoy are weather sensors that measure barometric pressure, solar radiation, relative humidity and wind direction and speed. Data on waves, like height, period and direction are also gathered. Deployed beneath the platform is a NexSens T-Node FR Thermistor String that collects information on the eastern basin’s temperatures in a profile down to 20 meters. At the end of this string, an additional sensor records conductivity and dissolved oxygen levels.

All sensor data are logged by a NexSens iSIC-OEM Data Logger housed securely within the S2 Yachts buoy. This logger is configured with cellular telemetry that allows it to send real-time measurements to officials at the Great Lakes Observing System. From there, data are posted online where they can be accessed by Great Lakes scientists and the general public.