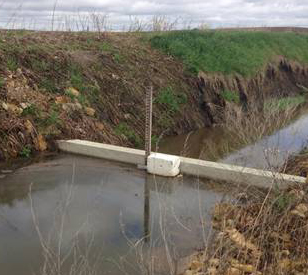 Because of its location in an agricultural watershed, a ditch in Minnesota’s Blue Earth County was retrofitted with a weir to help control discharges of excess nutrient and sediment loads. Curious to see what effects the new construction had on conditions downstream, researchers at Minnesota State University set out to investigate.

They began with a set of baseline data gathered between the months of April and November in 2013. These touched on the stream’s temperature, pH and dissolved oxygen levels, which they found to be increasing in a correlated way significantly throughout the day.

With that in mind, the researchers hypothesized that intensive algae growth combined with water-sediment interactions were causing the variations in temperature, pH and dissolved oxygen that they saw. To test their guess, they set up a series of weir water quality experiments in a lab looking to recreate the daily fluctuations. These analyzed samples that were either untouched, spiked with a cultured green algae or had sediment added to them directly from the Blue Earth County ditch.

Minnesota State researchers worked with NexSens Technology to source some of the equipment used in the weir water quality experiments, including a NexSens 3100-iSIC Data Logger (older iSIC-V2 model) equipped with cellular telemetry. This transmitted data to the scientists in real time so that the experiment could run unattended in their lab. 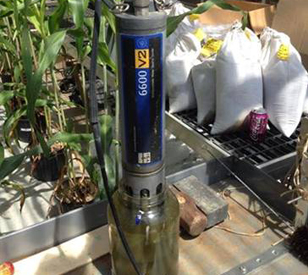 A Vaisala WXT520 Multi-Parameter Weather Sensor connected to the data logger and was fixed to the top of a sensor mounting pole where it could monitor ambient temperature. Mounted on an extended arm nearby was a LI-COR PAR sensor.

A YSI 6600 V2-4 Multi-Parameter Water Quality Sonde was deployed below the logger, placed in a sample jar. This jar was glass, copper-plated and insulated with thermoelectric heat sink. By using a heat lamp and by providing a full-spectrum light source, scientists were able to simulate heating, cooling, daylight and darkness typical for summer months. All the while, the sonde gathered data on the sample’s temperature, conductivity, pH and dissolved oxygen. It also gave researchers the options to optically measure turbidity, chlorophyll and blue-green algae.

Taking the collected data from that sample into consideration with those from other experiments they set up to dissect the fluctuations in temperature, pH and dissolved oxygen measured in the ditch, researchers found that the likely cause for the conditions came from a combination of stagnation, sediment composition and interaction, as well as primary producer abundance.