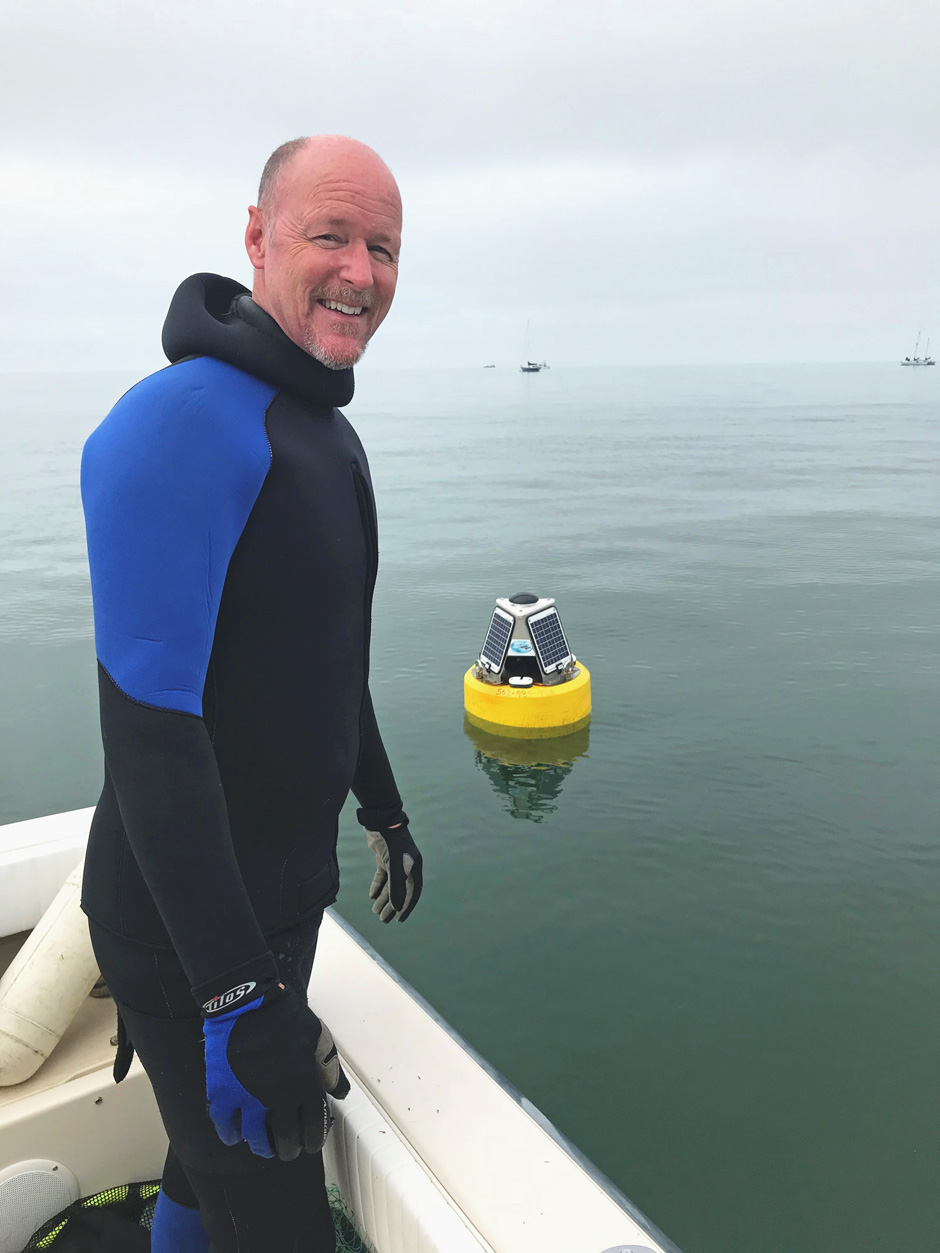 Shark sightings along California’s beaches are increasing. Legislation enacted in the 1990s has effectively helped shark populations recover from overfishing in prior decades that depleted both sharks and their food supply.

While scientists and environmentalists view this resurgence of sharks as a positive for the ecosystem, it has another effect – more frequent occurrence of sharks and humans in the same waters. The California State University Shark Lab is using modern sensing technology to study shark behavior and help inform the public so that beachgoers can stay safe while sharks can continue to thrive.

In the days when sharks were more likely to be encountered on a film screen than near the beach, it was common for shark sightings to be met with fear. However, increased prevalence and changing attitudes towards sharks offer an opportunity for awareness and understanding to supplant fear. The hope is that this can ultimately bring about a more harmonious balance between humans and sharks. A thorough study of shark behavior and public education about their behavior is critical to bring about a positive change in attitude towards sharks.

Cal State Shark Lab Director Chris Lowe certainly sees it this way. “The time is right to do this work because the public sees sharks through a different lens than we do as scientists. Marine biologists see sharks as important to the marine ecosystem. They could be a potential threat to swimmers,” Lowe said. “But we don’t know enough. So, let’s find out.”

The Cal State Shark Lab opened in 1966 with a twofold objective:

Fulfilling this objective called for the Shark Lab to go beyond simply diving with sharks. They introduced tagging and tracking systems to get a much deeper understanding of shark behavior. In recent years, Lowe’s work has included the design of sensing devices that can be attached directly to sharks. These sensors monitor animal movements as well as environmental conditions of the surrounding ocean. The environment these sensors must operate in is hostile – there are extreme variations in pressure caused by sharks diving and resurfacing, they must operate for extended periods in seawater – which we all know is a very challenging environment for any electronic device. Finally, they must be unconditionally reliable, because sharks seldom swim to a scuba diver wanting to have a failed sensor replaced. 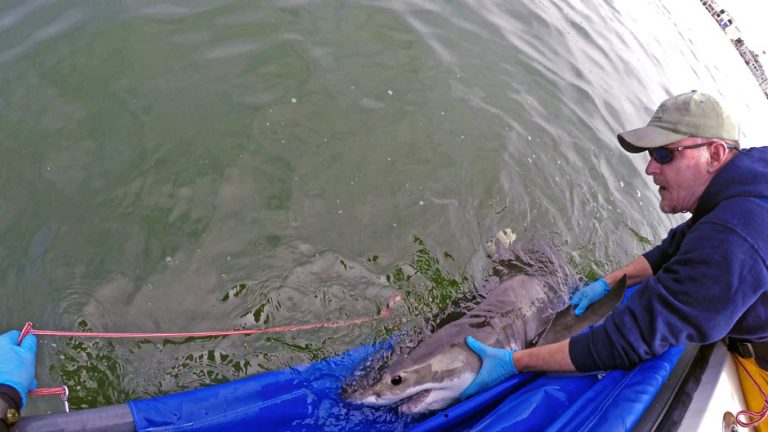 Lowe and the Shark Lab have dotted the California coastline with a series of NexSens CB-150 data buoys fitted with Innovasea acoustic digital receivers and cellular modems to greatly enhance their data collection capabilities.

Acoustic receivers collect information from tagged sharks as they pass nearby. They also log water temperature and depth where the shark was detected. An additional data logging package contains an inertial measurement unit (IMU). The IMU provides important data on the shark’s motion. These data can be used to calculate a variety of shark characteristics, such as calorie burn and diving behavior.

In the past, divers placed acoustic receivers on or near the seafloor to listen for acoustic tags for a period of 30 or so days. Divers later returned to retrieve the receivers, bring them to the surface, manually offload data, and then return them to their underwater home. Collecting data from the receivers was an extremely labor intensive and expensive process. Now, the Shark Lab places receivers on the CB-150 buoys, with cellular modems that transmit their detection data in real-time. Maintenance of the acoustic receivers is greatly simplified because they are easily accessible from the buoy undercarriage.

With its internal data well to house electronics and batteries, the CB-150 offers the flexibility needed to deploy the Shark Lab’s custom sensing technology in a small package that is easy to transport and deploy. The topside solar panels allow for continuous operation with minimal required maintenance. The CB-150 buoy enables the SharkLab to monitor shark locations in real-time. In addition to getting data quickly, a cellular modem also transmits data that helps identify issues with sensors or receivers when they occur, ensuring less downtime. 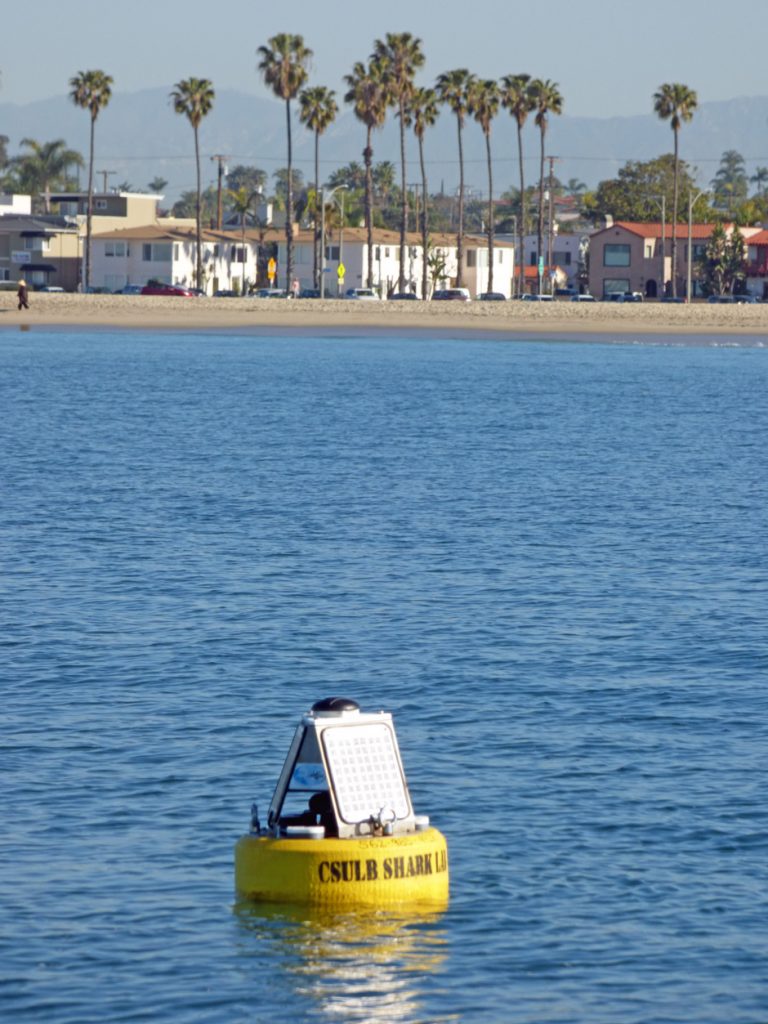 The sensor data provided by the Shark Lab’s tracking program is already yielding interesting results about shark behavioral patterns. For example, an explanation has emerged as to why there have been so many white shark sightings in shallow waters near beaches in recent years.

“It was a shock (to see so many sharks) because they have been in trouble for a while. When we started to look at the behavioral data, a lot of things began to make sense,” Lowe said. “These are all juveniles. One of the things we’ve learned – juvenile white sharks use beach habitats and beach lagoons. They spend more time in these areas.”

Besides just shark movement, sensing technology also monitors environmental conditions and other species like stingrays that sharks feed on. The more comprehensive data sets that are collected, the more complete picture of shark behavior and how it might evolve in a changing climate can be formed.

A reliable monitoring platform increases the potential for valuable data collection. In the case of the Shark Lab, Lowe hopes this will translate into a more informed public and long-term sustainable balance.

“All of this should be used as an educational tool. We can’t tag every shark, but if we tag a decent number and study their behavior, we start to understand their behavioral patterns, which ultimately will help us share the ocean with them.”

The NexSens CB-150 Data Buoy is ideal for deployment in lakes, rivers, coastal waters, harbors, estuaries and other freshwater or marine environments.