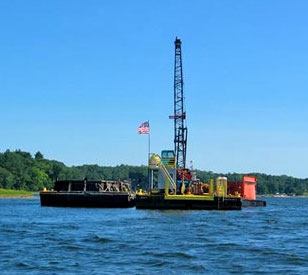 A large Midwest consulting firm was contracted to remove contaminated sediments from an embayment of Lake Michigan. The firm was required to monitor turbidity at two depths and five locations surrounding the dredge in order to ensure contaminated sediment levels did not exceed a specified range in the water. If sediment levels fell outside of the range, the dredge operator would have to be notified to slow down or alter the dredging operation.

As an embayment of Lake Michigan, with significant wave action and harsh weather conditions, the dredge site offered significant challenges for deploying and maintaining the monitoring sensors. The consulting firm selected NexSens Technology, a sensor and environmental consulting company with offices in the Great Lakes region. NexSens engineered a buoy-based system with real-time data telemetry. 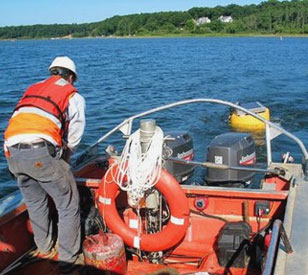 NexSens Technology applications engineers configured and set up a notification system that met the requirements of the consulting firm’s specifications. Five NexSens MB-400 environmental monitoring buoys were strategically anchored around the dredge. They were equipped with NexSens data loggers with radio telemetry and D&A Instruments OBS3 turbidity sensors. The OBS3 sensors were set to measure turbidity at both five- and ten-meter depths.

During dredging operations, data was collected at constant intervals and sent through license-free, spread-spectrum radio to the base station, where turbidity levels were closely monitored in real time using NexSens iChart software. When turbidity exceeded the regulatory limits, the dredge operator was immediately notified using a handheld radio.

Thanks to the NexSens real-time turbidity monitoring system, the contractors were able to safely and successfully dredge the embayment without incident.

Seametrics’ Turbo turbidity logger measures a wide range of NTUs, making it a versatile device capable of deployment at many different sites.