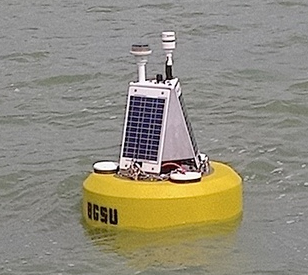 With Lake Erie’s algal bloom problem persisting in its western basin, state officials and researchers are working to expand monitoring capabilities there. Many of those are supported by networks of buoys that collect readings from advanced sensors measuring water quality.

The issue of most concern is maintaining the safety of drinking water for those living near the lake. In Sandusky Bay, the problem is no different. But there is a contrast in the type of algae it deals with when compared to other sites in the western basin. Algae in Sandusky Bay is most commonly planktothrix, a type of filamentous cyanobacteria. In other areas, including those near the water intake of Toledo, microcystis is of greater concern.

To get at that issue in Sandusky Bay, researchers at Bowling Green State University have deployed a new algal bloom buoy. Like others deployed in Lake Erie, it is equipped with sensors to measure algae, but its location near the Sandusky Big Island Water Works Intake sets it apart, letting it provide advance warning to water managers who keep drinking water safe for the residents of Sandusky.

Monitoring mycrosystis in the bay 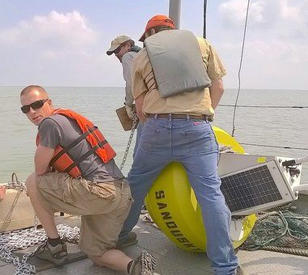 With its more shallow depths compared to other parts of the lake, deploying an algal bloom buoy near the mouth of Sandusky Bay called for a hefty platform capable of withstanding wave action there. But there was no need for a giant coastal monitoring buoy. Those needs led scientists to opt for a NexSens Technology CB-450 Data Buoy for the project. It is designed specifically for deployments in harbors that have robust wave action and decent depths. Its configuration also provides an instrument well for data loggers and batteries, passthrough pipes for environmental sensors and 10-watt solar panels for powering equipment onboard.

Topside devices on the algal bloom buoy include a solar marine light that serves as a beacon when the sun goes down to warn passing boaters of the platform’s location. Beside that is an Airmar 200WX Ultrasonic WeatherStation Instrument that measures air temperature, barometric pressure and wind direction and speed. Weather conditions are important as temperatures and wind can influence the strength and movement of algal blooms.

Beneath the buoy, securely deployed in a passthrough hole, sits a YSI EXO2 Multi-Parameter Water Quality Sonde that has sensors for measuring water temperature, specific conductance, pH, turbidity, chlorophyll, dissolved oxygen and blue-green algae. The sonde features a central wiper that spins every so often to clean all sensors and ensure they maintain reliable data collection.

Data gathered by the YSI EXO2 and Airmar 200WX are logged by a NexSens X2-CB Buoy Data Logger contained in the CB-450’s instrument well. The readings are sent via cellular telemetry to a computer operating NexSens iChart software. The program works with WQData LIVE, a web datacenter that helps scientists share project information and get work done. It also features a public data portal to share the buoy’s data. The points are being used by Sandusky water managers, scientists studying Lake Erie and the public, thanks to the Great Lakes Commission’s BeachCast mobile app.