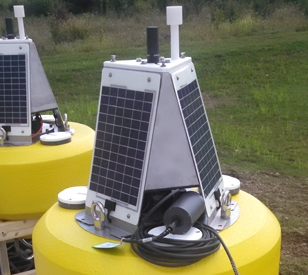 To clean up environmental contaminants released in its waters going back to the 1960s, the San Diego Regional Water Control Board ordered dredging actions to begin in San Diego Bay in March 2012. The plan of approach was clear: A section of the bay, called the South Site, would be dredged first, and then a second phase of the work would dredge the North Site.

Organizations involved in the work included companies that contributed to discharges of pollutants affecting the bay. These were responsible for funding dredging operations and monitoring work required by law to minimize its impacts to aquatic life.

Work in the South Site was completed in March 2014 and attention shifted to dredging needed for the North Site. Anchor QEA was selected to oversee the project’s management and its engineering needs. The company worked with dredge operators to clear out contaminated sediment while monitoring effects of the work using data buoys sourced from NexSens Technology.

These buoys were equipped with multi-parameter water quality sondes and telemetry packages to deliver data to project managers in real time while work was underway. This meant that dredging could quickly be shut down if conditions were found to be out of healthy specifications for aquatic life living in San Diego Bay.

Buoys in the bay 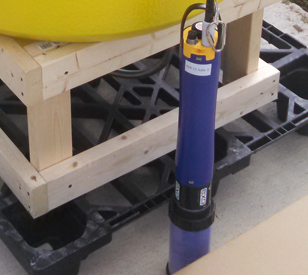 The North Site covered an area of the bay containing working shipyards used for the repair and maintenance of U.S. Navy ships. Because of this use, it was important that dredging and monitoring efforts around them could be relocated quickly to minimize impacts to Navy operations.

NexSens Technology CB-450 Data Buoys were the best choice for the work because they are sturdy platforms capable of standing up to rough wave actions possible in large ocean bays. But they are also small enough to be deployed and re-deployed quickly by a small crew using a single boat.

Project managers at Anchor QEA used three CB-450 data buoys throughout the work at the North Site. These were launched around dredging operations, regardless of where they moved around the shipyard, and supported YSI EXO2 Multi-Parameter Water Quality Sondes. These were deployed on mooring lines running beneath the buoys and monitored temperature, conductivity, pH, dissolved oxygen and turbidity. Of these, turbidity was of most concern to project managers because of its potential to choke fish and other lifeforms that rely on steady dissolved oxygen levels to survive.

Data from the sondes were relayed to X2-CB Buoy Data Loggers held securely in each buoy’s instrument well. These were equipped with satellite telemetry and broadcast readings at project-required intervals to officials overseeing the operations. All data were made visible from any device through WQDataLIVE, which is used to track readings and set up alerts notifying managers if parameters reach unhealthy thresholds.