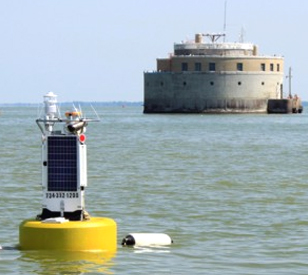 The City of Toledo had been working for some time with LimnoTech, a water engineering firm based in Ann Arbor, Michigan, to design and deploy a monitoring platform for tracking conditions near the city’s water intake on Lake Erie. But after the Toledo water crisis of 2014, which saw half a million people deprived of water for consumption and bathing because of high levels of algae-produced toxins, the city put the project on the fast track.

With such a sense of urgency in effect, LimnoTech turned to NexSens Technology for quick turnaround on one of the company’s CB-950 buoys. Built with stability perfect for Lake Erie’s challenging waves, the CB-950 has features that LimnoTech scientists knew would prove important to the project’s success: solar panels, a tower and mounting plate for above-surface monitoring devices and multiple top-to-bottom ports for supporting water quality sensors below. The NexSens CB-950 also wins in flexibility, offering an instrument well that can house any data logger. And LimnoTech scientists were able to capitalize on that by installing their logger of choice.

Five days after the initial drinking water ban was imposed, the buoy was in the water and tracking environmental conditions near Toledo’s intake crib. The new platform made for critical advancements to the city’s monitoring capabilities, improving data lag time by about 24 hours for those watching water quality before it enters the drinking water supply. Data are also being posted to a web portal supported by Michigan Technological University, and shared with the National Oceanic and Atmospheric Administration’s National Data Buoy Center as well as researchers studying the problem of harmful algal blooms on Lake Erie.

The right buoy for the job 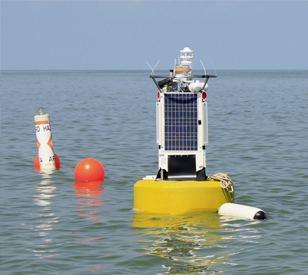 A NexSens CB-950 data buoy supported sensors that measure conditions key to the formation of algae on Lake Erie, including parameters related to weather and water quality.

A Lufft WS501 was mounted on the buoy’s tower. The multi-parameter weather sensor tracks air temperature, humidity, barometric pressure, solar radiation and wind. Extreme changes in conditions like wind have been proven to influence the spread of algae, while solar radiation, or sunlight, is used by algae to fuel growth. Researchers also added a 5-megapixel camera to the platform to provide short video clips of conditions on the lake that they can review to confirm sensors are operating within specifications.

On the bottom side, a YSI EXO2 Multi-Parameter Water Quality Sonde sits securely in one of the buoy’s top-to-bottom ports. It is equipped with sensors for measuring temperature, conductivity, pH, dissolved oxygen and turbidity. An EXO2 central wiper installed on the sonde keeps each sensor clear of biofouling to ensure high data accuracy. Deployed below the buoy and looking up from the lakebed is a Nortek Acoustic Waves and Currents sensor that keeps tabs on water speed and direction at 1-meter increments, as well as wave height and period. 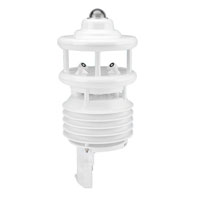