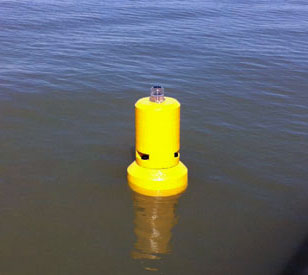 Lake Erie is described by many as the “walleye capital of the world,” but dwindling populations of the fish pose a concern for Great Lakes fishermen. The region’s multi-billion-dollar commercial and recreational fishing industry relies heavily on walleye, and the last major walleye hatch in Lake Erie occurred in 2003. Hatch sizes since then have been, at best, below average. A six-year period of substandard spawning is unprecedented; worse yet, many worry that the lake’s walleye population has been on the decline since long before 2003.

The Ohio Department of Natural Resources’ Division of Wildlife Sandusky Fish Research Unit is exploring whether walleye spawns are affected by lake currents. Aiding in the study are two current-tracking data buoys, positioned proximate to reefs in the lake where walleye breed. The investigation, part of a multi-agency project, will further examine findings from research by Michael Jones at Michigan State University’s Department of Fisheries and Wildlife.

Jones’ research, which uses wind velocities over the lake to approximate lake currents, indicates that the success of a hatch seems to correspond with whether current is pushing toward or away from shore. This is largely because distance to shore dictates how warm the waters are, and temperature affects incubation and larvae growth, explains Fisheries Biologist Travis Hartman from the Sandusky Fish Research Unit.

“If you have an inshore current flow, the larvae end up in nearshore areas,” Hartman said. “These nursery areas are warmer and more hospitable to the young larvae, which potentially results in a larger hatch.” If current has an offshore flow, on the other hand, the larvae tend to settle in cooler, less productive areas closer to the center of the western basin. These locations are less accommodating to emerging fry and support smaller hatches.

Watching the current for walleye 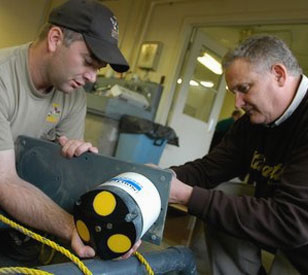 NexSens Technology was selected to assist in the design and configuration of the monitoring systems for the study. Both buoys utilize acoustic Doppler current profilers that track water velocity in 3D over a range of up to 40 meters.

The first buoy was deployed in the spring of 2010 and located west of Put-in-Bay between the Niagara and Crib reefs. Walleye breed on the reefs, which are shallow areas composed of rock and substrate where the eggs can be safely nestled. Although there are more than 10 named reefs in Lake Erie, Hartman noted that they are mostly all connected to each other.

The current meter is mounted to an instrument sled at the lake’s bottom. Also attached to the sled is a multi-parameter water quality sonde with sensors for measuring temperature, conductivity, and dissolved oxygen, which Hartman said are all factors that can affect a hatch.

“We need to know more about warming rates, oxygen levels, and prevailing currents during the hatch,” he said.

Keeping these sensors at the lake bottom within this field of reefs is important for representative data.

“We wanted to measure the water quality closer to the bottom of the lake,” he said. “Those are the conditions most similar to what the eggs are experiencing.”

In the spring of 2011, the ODNR worked with NexSens to add a second buoy and upgrade the existing one.

The first buoy was replaced with a NexSens CB-100 coastal data buoy, which is extremely sturdy when faced with heavy wave action. Additionally, the on-board data logger, which was previously a standalone X2-SDL submersible data logger, was upgraded to support real-time cellular telemetry. This allows Division of Wildlife researchers to review the latest data without making a trip to the buoy.

The second CB-100 data buoy was deployed in a separate reef. The connected Doppler unit is mounted within a Sea Spider fiberglass seafloor platform, which secures the Doppler unit to the lake bottom and protects it from trawling.

Both buoys are equipped with NexSens T-Node temperature strings. Connection to each of the seafloor Doppler units is possible through these temperature strings, which utilize sensorBUS pass-through technology to allow for interfacing with additional devices anywhere along the string.

Understanding what affects the walleye reproduction rates is particularly difficult in Lake Erie, considering how rapidly the lake has been changing over the last several decades. In addition to nutrients entering the lake, a multitude of new invasive species such as the zebra mussel and round goby are rapidly shifting the lake’s ecology.

Though daunting, the research Hartman and others at the ODNR are conducting could pave the way to a more sophisticated model of walleye reproduction in the lake and solve the mystery as to why there hasn’t been a great hatch in nearly a decade.

“Obviously we can’t control the hatch size,” Hartman said. “But we’re at least trying to figure out how to better predict what is happening.”

The CB-50 data buoy is designed for quick deployment in emergency response situations including industrial spills and natural disasters. 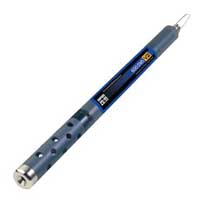