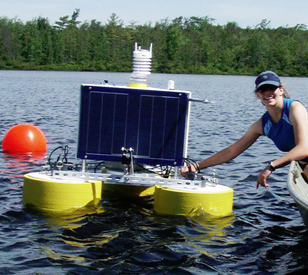 The Lacawac Sanctuary and Biological Field Station overseen by Miami University’s Center for Aquatic and Watershed Sciences is home to lots of exciting research projects. Its namesake, Lake Lacawac, is part of the Global Lakes Ecological Observatory Network, an expansive group of scientists worldwide who study how lakes respond to environmental change. Because of that status, it makes sense that data collected at the sanctuary are used in projects near and far.

There are plenty of interesting water quality research projects going on there, relying on gear like secchi disks, handheld meters and plankton nets. But in addition to those, there is new and inventive research afoot at Lacawac Sanctuary.

One of those involves a custom auto-profiling platform developed by scientists at Miami University with help from NexSens Technology. It supports topside sensors, as well as a profiler that uses a creative winch system to lower and raise water quality sensors through Lake Lacawac’s water column. Taking that approach, Lake Lacawac investigators are looking to make new finds relating to the interactions between Lacawac’s water and the atmosphere, as well as answer key questions on dissolved organic carbon levels.

Not your typical monitoring system 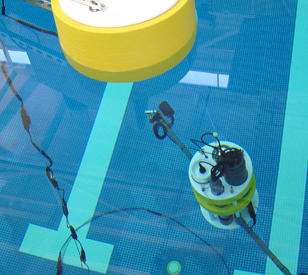 The platform is no typical buoy system. Instead of a single buoyant piece of foam that serves as a structure to support sensors and its ability to float, it has three set out in a stable triangular configuration. Each has a buoyancy of 75 pounds, bringing the total to 225 pounds, and holds a rechargeable battery pack charged by three solar panels. These ensure the platform as a whole gets the power it needs. The configuration was devised with the guidance of NexSens Technology engineers to support the numerous environmental sensors onboard, as well as operation of the winch system.

A Vaisala WXT Multi-Parameter Weather Sensor sits on top of the platform. The compact weather station takes measurements of essential weather parameters including liquid precipitation, barometric pressure, temperature, relative humidity and wind speed and direction. Next to the WXT sits a solar marine light that acts as a beacon when the sun goes down to warn those near the lake of the platform’s location on the water. A LI-COR LI-190 PAR Sensor is also deployed on the topside to measure photosynthetically active radiation. It is complemented by a Kipp & Zonen NR Lite2 Net Radiometer that can measure the balance between incoming and outgoing radiation.

Many of the measurements taken under the surface of Lake Lacawac are supported by the winch and a smaller platform it raises and lowers periodically. This holds a YSI EXO2 Multi-Parameter Water Quality Sonde, NexSens AccuStage Water Level Sensor, a Turner Designs C6 Fluorometer, a battery pack and a NexSens SDL Submersible Data Logger equipped with Bluetooth telemetry. Two arms on either side of the smaller platform each support a LI-COR LI-192 Underwater PAR Sensor to measure photosynthetically active radiation that penetrates through the water column.

The winch sends the sensor package down through Lake Lacawac every six hours, but its sensors sample every hour. While at the surface, the SDL reports to a NexSens Data Logger housed within the solar panel enclosure. This logger, equipped with radio telemetry, communicates with the topside sensors, which gather data every 15 minutes, as well as a stationary string of NexSens T-Node FR Thermistors and an Airmar EchoRange SS510 Smart Sonar Depth Sensor. These plug into a junction box mounted beside the logger.

The 4100-iSIC Data Logger transmits the measurements it collects to a base station housed at the biological field station. Scientists can then download the findings and analyze them to spot trends. Taken together, the data provide interesting long-term insights into the workings of Lake Lacawac, relating to its water quality, stratification and atmospheric reactions.

The C6P Submersible Fluorometer can be configured with up to six optical sensors ranging from the deep ultraviolet to the infrared spectrum.