Officials at the South Florida Water Management District oversee many stormwater treatment areas as part of their mission to manage and protect water resources in southern Florida. Those include many constructed wetlands, some with aquatic vegetation and some without.

Because the effects of aquatic vegetation on nutrient transport in wetlands are relatively unknown, scientists with the Management District set up monitoring equipment to learn more. Their investigation looks specifically at the role that wind plays in wetland nutrient transport, given the presence or absence of vegetation.

Their results may one day be useful for improving the management of SFWMD’s stormwater treatment areas, as well as reducing nutrient concentrations in the wetlands it oversees.

Staying ahead of stormwater 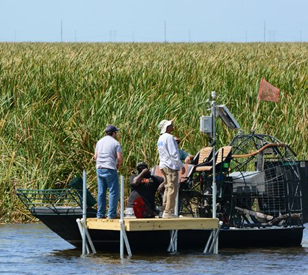 Researchers elected to outfit two wetlands with solar-powered NexSens data loggers and Airmar 150WX Ultrasonic WeatherStation Instruments to find relationships between wind and nutrient movement. One wetland site has plenty of emergent aquatic vegetation, while the other is in an open-water area.

Each Airmar WeatherStation Instrument collects data on wind speed and direction, air temperature, barometric pressure, relative humidity and dew point. The information is recorded by the NexSens data loggers and later downloaded via direct connection by scientists with the District who view it via NexSens iChart software.