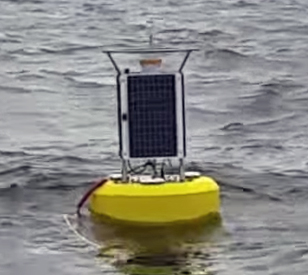 Just one year after the Toledo water crisis of August 2014, federal, state and local agencies have stepped up to make sure that cities around Lake Erie’s western basin continue to have access to safe drinking water. Much of assuring that requires around-the-clock monitoring of water quality conditions there.

Since the western basin is so large, not just one monitoring platform will do. Accordingly, researchers and water quality managers from different universities, cities and government agencies have launched more than a dozen data buoys, all armed with algae sensors, to do the job.

One of the prominent agencies involved in the work is the National Oceanic and Atmospheric Administration. In the summer of 2015, scientists at the agency added four new platforms to the algal bloom monitoring network that has taken shape since the Toledo crisis. Three of these buoys were launched in the summer of 2015 near Maumee Bay and at other points off the shore of Michigan.

Given the complex weather conditions and demanding wave actions that are common in Lake Erie’s western basin, NOAA researchers selected NexSens CB-650 Data Buoys for the algal bloom monitoring network. These were chosen over the smaller CB-450 model, which has been used successfully in many other projects in the basin, because of their extra buoyancy and size. Those attributes met project needs, as the larger buoys were well suited to stand up to the deeper waters at deployment sites.

The right buoy for the job 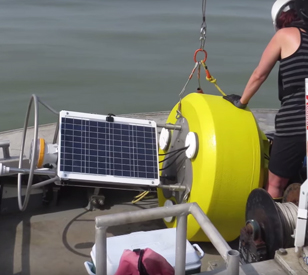 The CB-650’s large instrument well was ideal for securely holding custom data logging and telemetry equipment that the NOAA scientists used. In addition, it came built with integrated solar panels for providing steady power to all onboard sensors and passthrough holes to securely deploy the high-tech water quality sondes that would monitor algae in Lake Erie’s waters. A topside plate on each buoy, commonly used to mount solar marine lights, also provided some extra space for adding atmospheric or weather sensors in the future.

On the bottomside of every buoy, a YSI EXO2 Multi-Parameter Water Quality Sonde is mounted in one of three passthrough holes. Each sonde is configured to measure conductivity, temperature, pH, oxidation-reduction potential, turbidity, fluorescent dissolved organic matter and total algae. All of these are complemented by a central wiper that spins periodically to clear away biofouling and keep readings reliable.

The EXO2 sondes are joined by WET Labs Cycle PO4 Phosphate Sensors and Turner Designs C6 Multi-Sensor Platforms on each buoy. These are also securely deployed in passthrough holes on each CB-650. The phosphate sensor is useful because it gives scientists an idea of the effects that agricultural phosphorus from runoff is having in the western basin. The Turner C6 instruments each carry six sensors used on Turner C3 fluorometers, ranging from blue-green algae to chlorophyll, colored dissolved organic matter and beyond.

All of the sensors report readings to the onboard NOAA data loggers at project-defined intervals. These transmit findings to officials at the Great Lakes Observing System who post them online so that researchers and water quality managers around the basin can easily access them via internet connection.

Images courtesy of the University of Michigan

The NexSens CB-650 Data Buoy is designed for deployment in lakes, rivers, coastal waters, harbors, estuaries and other freshwater or marine environments.

The C6P Submersible Fluorometer can be configured with up to six optical sensors ranging from the deep ultraviolet to the infrared spectrum.