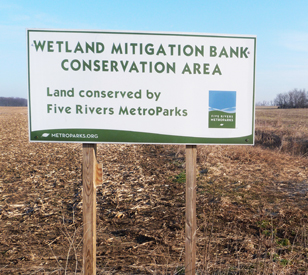 The Great Miami Wetland Mitigation Bank is the only such bank in Ohio offering stream restoration credits. It offers credits for corporations and others who want to offset the wetlands they destroy through construction by buying newly restored wetland space. But alongside that mission is another that is mapping the transport of gases as restored wetlands take shape. It is looking at the big question of whether or not newly restored wetlands are sources of greenhouse gases or sinks for them.

The University of Nebraska-Lincoln, with funding from NASA, is heading up the work. Scientists with the school instrumented the mitigation bank with a number of monitoring stations to chart changes that a newly restored wetland undergoes. After all, the lands used to serve as fields for growing corn.

Demand for the wetland credits is high, as Five Rivers Metroparks sold nearly a third of those available before construction ever began. In addition to the money the bank will help generate for the organization, the restored wetlands are yielding new habitat for wildlife, as well as a worthwhile study ground to chart changes that occur in newly restored wetland spaces.

Sink or Swim – Where does Gas Go? 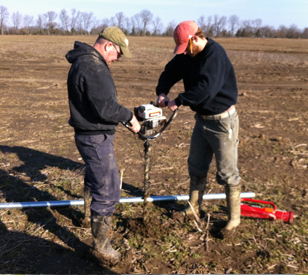 Twelve monitoring sites sit around the wetland mitigation bank. All but one are based on NexSens 4100-MAST Data Loggers with radio telemetry. These collect information from the sensors connected to them and then broadcast to a NexSens 3200-AVSS Data Logger that is equipped with radio-to-cellular communications. This logger receives the data from the others via radio and then transmits it through cellular towers to researchers at U. Nebraska who view it online via a NexSens WQData LIVE web datacenter.

The deployment of each site is spaced appropriately so that scientists can get an accurate idea of different conditions throughout the wetland. In sets of 4, sites are situated at different levels, allowing researchers to quantify gas concentrations at changing heights above or near the wetland. These are designated as wetland pond sites, transition sites and upland sites.

The sensors are helping scientists learn if newly restored wetlands are sources of greenhouse gases or useful in taking them out of the atmosphere. And with such a detailed dataset, U. Nebraska researchers will be able to chart the conversion period, or the time period needed for a restored wetland to change from a greenhouse gas source to a sink taking gases out of the air. 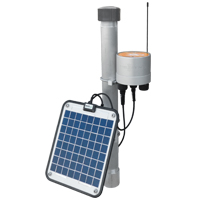 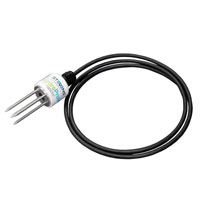 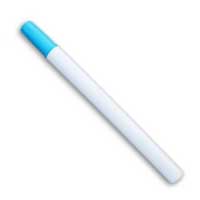