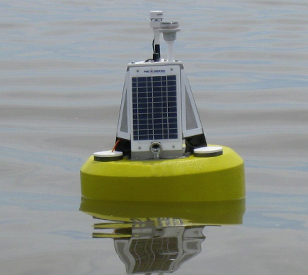 Keeping an eye on the health of Lake Erie is a big job, involving a lot of agencies, organizations and monitoring equipment. The collective efforts help make the lake one of the best studied in the world, along with the other four Great Lakes. Buoy networks in Lake Erie are important to those efforts, as they help scientists around it keep tabs on measurements influencing the lake and its health.

Off the shore of Cleveland, near the lake’s central basin, measurements of dissolved oxygen are of significant concern to those studying the lake. This shallow region has come to be known as Lake Erie’s hypoxic zone because of the tendency of bottom waters in it to become anoxic, or without oxygen, in the late summer each year.

The Lake Erie hypoxia issue can’t be studied directly using manually collected water samples from the lake’s surface. Instead, it takes a suite of sensors deployed through the lake’s water column capable of capturing changes. As a result, data buoys have been used in the area for years, maintained by the National Oceanic and Atmospheric Administration’s Great Lakes Environmental Research Laboratory, to support the sophisticated water quality sensors involved.

In summer 2015, a new buoy was deployed in the hypoxic zone. Officials at NOAA GLERL and the Great Lakes Observing System helped to fund it, with monies going to LimnoTech, an environmental consulting firm. The Ann Arbor-based LimnoTech worked with NexSens Technology to source the platform needed to successfully monitor the bottom waters. 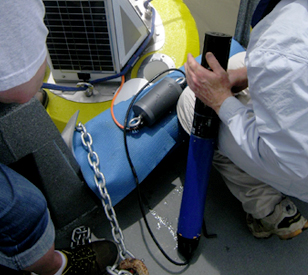 Conditions in the middle of a great lake are hard to predict. Wave actions can vary and weather can change in a flash. For those reasons, engineers with LimnoTech chose a NexSens CB-450 Data Buoy for the project. It had robust features needed for the work to be successful, including integrated solar panels for power; passthrough holes for securely deploying sensors; and an instrument well to hold data loggers and batteries. In addition, the CB-450 has been a reliable choice for other successful LimnoTech buoy projects in the Great Lakes.

On top of the platform sits a solar marine light that blinks at dusk to act as a beacon to boaters passing by. Next to this is an Airmar 150WX Ultrasonic WeatherStation Instrument that tracks apparent and true wind, air temperature and barometric pressure, as well as GPS location. Monitoring weather changes is important because they influence lake dynamics like mixing and stratification.

Below the platform, safely deployed in one of the CB-450’s passthrough holes, is a YSI EXO2 Multi-Parameter Water Quality Sonde. It is equipped with sensors to monitor Lake Erie’s temperature, conductivity and dissolved oxygen. The center port of the sonde also supports a central wiper that spins periodically to keep the sensors clear of biofouling, ensuring data accuracy over the long term. In addition, a NexSens Technology TS210 thermistor string runs beneath the buoy, capturing data on temperature changes in a profile that allows scientists to sort the lake’s strata based on temperature.

Readings collected by the sensors are logged to an X2-CB Buoy Data Logger that sits inside the CB-450 buoy. The logger is equipped with a satellite modem that transmits findings on Lake Erie hypoxia to managers at the Great Lakes Observing System who post them online for use by researchers around the basin and worldwide.