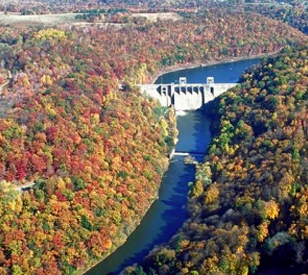 In 1938, as part of an effort to develop flood controls in the Allegheny River basin in Western Pennsylvania, the U.S. Army Corps of Engineers broke ground on the Mahoning Creek Dam. By 1941, the project was complete.

Although initial plans to equip the dam for hydropower were scrapped due to steel shortages associated with the nation’s accelerating war mobilization efforts, project engineers included a hydropower conduit in the final design so the dam could later be retrofitted for energy production.

Seven decades later, Enduring Hydro, a Maryland-based hydropower developer, has implemented the vision of those early engineers. In partnership with the U.S. Army Corps of Engineers Pittsburgh District, the company has constructed a 6-megawatt, environmentally responsible hydroelectric facility on the Mahoning Creek Dam.

Enduring Hydro expects that the facility will generate 20,000 megawatt-hours of clean, carbon-free electricity annually for the next 50 to 100 years. That is enough electricity to power 1,800 homes and is equivalent to planting 1,000,000 trees as it replaces 10,000 tons of carbon dioxide from fossil fuel electricity.

Water from the upstream reservoir flows into a 10-foot diameter steel conduit, travels 1,000 feet downstream and enters a powerhouse containing two specially designed hydropower turbines. The Mahoning Creek reservoir stratifies in the summer, and the deeper zone can have fairly low oxygen levels.

To mitigate this risk, Enduring Hydro, in coordination with the Army Corps and the Pennsylvania Department of Environmental Protection, has studied the system and evaluated how the project could impact Mahoning Creek water quality. Based on this work, Enduring Hydro and the Army Corps collaboratively developed an Adaptive Management Plan which specifies how the facility will be operated. 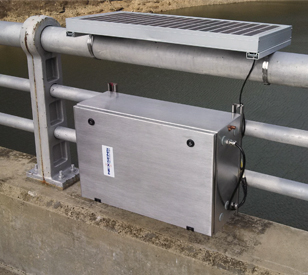 To implement the Adaptive Management Plan, a network of data loggers and water quality sensors monitors water quality at the reservoir intake, in the stilling basin just downstream of the dam, and at the hydropower outfall. The Intake site consists of a NexSens radio to cellular telemetry system connected to a YSI sonde with sensors for making dissolved oxygen measurements in the reservoir where water is drawn for the plant.

The system includes an iSIC data logger with a radio and a cell modem. The radio is used to communicate with iSIC data loggers at the Stilling Basin and Downstream sites, while the cellular modem transmits all of the water quality data to the iChart project running on the NexSens server. Data is made available to project personnel through the NexSens WQData LIVE web datacenter.

At the Stilling Basin and Downstream sites, a radio telemetry system, coupled with a YSI sonde, transmits water quality data back to the system at the Intake. In addition to water quality measurements from the YSI sonde, the Downstream site is also fitted with an RM Young barometer and a Measurement Specialties Eureka Manta 2 probe for making total dissolved gas (TDG) measurements.

Besides transmitting water quality data to the NexSens server, the system is also linked directly to the hydro plant’s SCADA system through a Modbus RTU connection. The iSIC data logger in the system is configured to output the water quality data in Modbus format as it is received so that it can be displayed on the plant HMI and monitored by the on-site staff. The plant operational data is also sent back to the iSIC via the Modbus link so that it can be posted to the WQData LIVE web datacenter, thus allowing project personnel to remotely monitor the performance of the plant.

The overall data flow of the system is summarized in the below figure (click to enlarge): 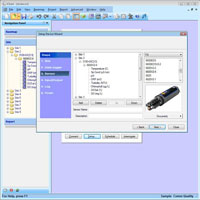 iChart software simplifies and automates many of the tasks associated with acquiring, processing, analyzing and publishing environmental data.