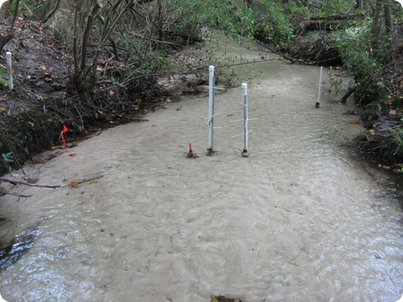 Temperature data can be used for the qualitative and quantitative assessment of groundwater-surface water interactions. Surface water bodies, such as streams, often undergo diel variations in temperature, whereas deeper groundwater may maintain a relatively constant temperature.

In the shallow hyporheic zone, where ground and surface waters mix, temperature profiles can provide insight regarding the direction of groundwater flow. For example, in a down-welling stream reach (one in which water flows from the stream into the hyporheic zone), the temperature behavior in the shallow subsurface may show the diel temperature variation caused by the downward moving surface water. Conversely, in an up-welling reach, shallow subsurface temperatures may show little variation in temperature because they are primarily affected by the groundwater moving upward from deeper in the subsurface.

In addition to providing qualitative information regarding the direction of water movement, temperature data can be coupled with computer models to develop quantitative estimates of streambed seepage and hydraulic conductivity. 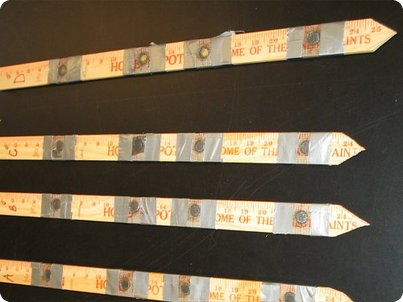 Dr. Eric Henry and his students at the University of North Carolina Wilmington are using Maxim iButton temperature loggers to examine these interactions in an urbanized creek near the UNCW campus. They have installed chains of multiple temperature loggers at several locations within the stream channel. Each chain has a temperature logger located in the surface water, as well as loggers at various depths below the streambed. The chains are built by drilling holes large enough to accommodate the iButton loggers in wood or PVC strips. The loggers are then epoxied into the strips before they are hammered to the desired depth in the streambed.

iButton temperature loggers’ small size allows them to be easily installed in the streambed without disrupting natural subsurface flow patterns. Additionally, the strips have a small profile in the surface stream, thus reducing the possibility of having the chains damaged by floating debris. The relatively low cost of the loggers has facilitated the collection of simultaneous, high temporal frequency data in multiple locations within the stream.

iButtons typically interface with a computer using a USB adapter that must simply touch the surface of an iButton for data connection. Modification of this USB connector was necessary, however, because the loggers were epoxied into the PVC strips and could not be removed to download the data. Instead, engineers attached lead wires to the USB connector to allow for data transfer.

The preliminary data from the project suggests that groundwater is primarily moving upward at the sampled locations, except for periods following large storm events, in which the flow direction may change. Future efforts will include quantifying the groundwater fluxes to the stream and examining variations in the stream temperature behavior as a function of downstream distance and geology.

Further information on temperature and groundwater-surface water interactions may be found here: Heat as a Tool for Studying the Movement of Ground Water Near Streams